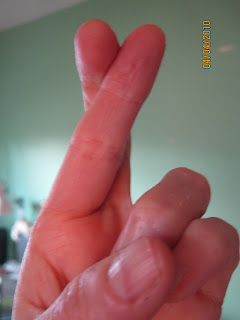 Yup...those be my fingers.  Why are they crossed?  Because...and I'm almost afraid to jinx things by bragging (heaven knows I've thought I was at this place before...)...but...I think I may have finally found the cause of this boy's awful tummy problems. 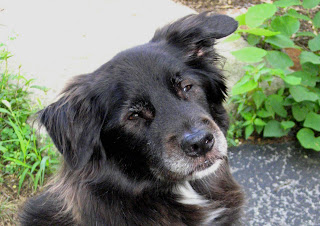 For the past three months, we (meaning mostly me...) have been working like crazy and losing LOTS of sleep trying to get to the bottom of the acid reflux/IBD/bilious vomiting syndrome that has cursed sweet Wilbur and our family.  I have rarely slept longer than six hours a night and, even then, have kept one ear open, listening for restlessness, lip smacking, whimpering...any sign that disaster may be near.  I am one tired chicky.

But...we have had two very good days in a row, and I think I may have found the last piece to the puzzle - water!  As in way too much of it at one time.  Wilbur is on the shady side of 12, and he has been having some cognitive issues recently.  He's also a border collie who has had weird obsessive behaviors throughout his life.  When his tummy troubles began, we noticed his water intake doubled.  After all his bloodwork came back normal, the vet decided he was drinking water to try to settle the acid in his tummy - kind of like when we drink something trying to rid ourselves of heartburn.  Drinking became a sign that his tum was upset.

Last week was a bad week for Wilbur and me.  He was doing a lot of urping, his energy level was very low...he seemed pretty out of it a lot of the time.  It was a bad week for me because I was sleeping even less, and I was wracking my sleep-deprived brain trying to come up with a solution.  Call it an Easter Miracle...I think I found the solution!

Friday night, sitting at the kitchen table watching him drink more and more water, it came to me...what if he's not drinking because he's nauseous...what if he's nauseous because he's drinking so freakin' much water???  What is he's overloading his system and the drinking is an obsessive behavior?  Suddenly, I had a plan!  And as if to confirm my hypothesis, after I put his water bowl up, gave him his evening Pepcid and went to bed, he slept (which means I slept!) eight whole hours!!!!  Saturday morning, I calculated how much water he needed for the day and how to ration that out in small servings.  And I started giving him 150ml in his water bowl every 2-3 hours.  We have had two whole days of no urps and great energy for Wilbur, and two very restful nights of sleep for Romeo and me.  Yes, fingers are crossed...toes, too...in fact, any appendage which will cross...next, I'll take on the farts (Wilbur's, you understand...). 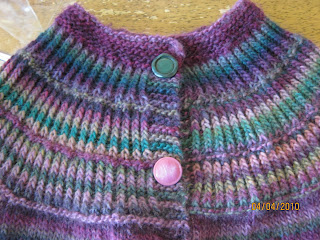 In between my veterinary experimentation, I have been knitting.  In fact, I reknit and finished the Shalom Cardigan.  In retrospect, I wish I'd made it about 3" longer, but I'm still pleased with it.  I'm also on the fence about the buttons.  I wanted to use some vintage buttons from the combined Mom/Grandma McLaughlin button box, but could only find one of the two I liked best, so I decided to do mismatched buttons.  Both buttons look great with the yarn.  However, in retrospect, I may lose the pink button and just have a one-button cardigan.  Opinions???  Other than "Dear god, woman...you really need to get in shape..." 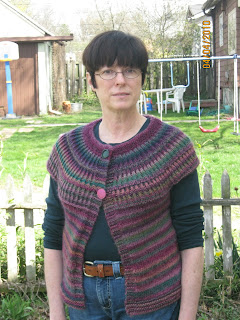 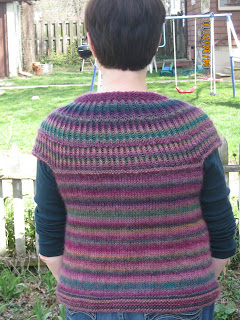 Or maybe I just shouldn't attempt horizontal stripes...look up "big as a barn" in the dictionary, and you'll see the above photo.  Yikes!

I'll leave you all with a great little idea I got here from Lifehacker (one of my favorite sites).  Whodathunk you could have such fun with binder clips! 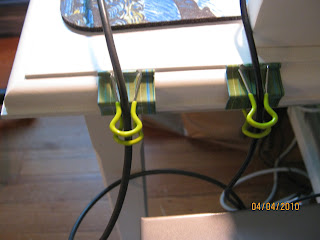 Chag Pesach Sameach, Happy Easter and...if there's another holiday being celebrated that I'm not aware of, fill me in - we'll celebrate anything that isn't nailed down!  Woooo-hooooooooo...
Posted by Laurie at 8:17 PM 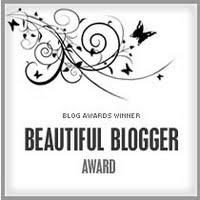 What's on My Needles?

These are a few of my favorite links...

What I'm Listening to While I Knit